How the press brake machines are driven automated?

How the press brake machines are driven automated?

Rapid advances in sheet metal fabricating technologies can produce amazing results. The latest “big thing” to hit the industry is the fiber laser. The productivity gain from these press brake machines are spectacular—well, until you find a mountain of flat blanks in front of your press brake.

Over the years press brake machines have undergone three big changes: how the press brake machines are driven, how they are automated, and, finally, how parts flow through them (see Figure 1). The challenge most fabricators face is understanding these transformations and how to apply them to their situation. Applied correctly, though, they all work together to free the bending bottleneck.

During the first half of the 20th century, most press brake ram drive systems had a motor, flywheel, eccentric crank, and brake (hence the name press brake). The flywheel stored a massive amount of kinetic energy, and the clutch engaged the bend cycle. The eccentric crank transformed the rotary motion from the flywheel to the linear pressing motion of the ram. The brake halted the bend cycle.

Such mechanical press drives could easily achieve a whopping 30 strokes per minute (SPM). These brakes dominated the sheet metal industry until the 1960s, when the business shifted from mass production to just-in-time manufacturing. 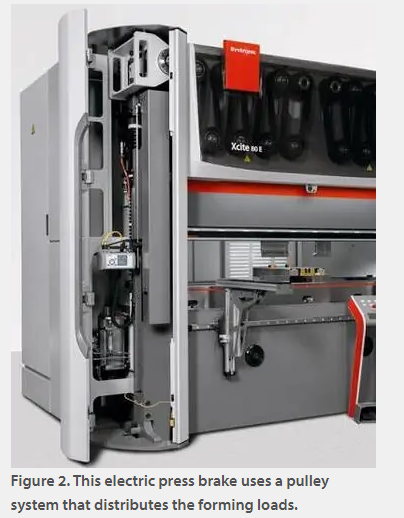 To address this, fabricators willingly sacrificed SPM on their press brakes for flexibility. This change affected the heart of the press brake, with a complete redesign of the press drive itself. These newfangled hydraulic press drives, with their associated flow control valves, offered total flexibility of ram speeds, stroke lengths, applied force, and, most important, variable bend angle control.

These first-generation hydraulic press drives were not as dynamic as the mature mechanical press drives were. To compensate for this “sponginess,” press brake manufacturers simply slowed the ram speeds.

These flexible press drives dominated the sheet metal industry until recently, when demand shifted once again from JIT manufacturing to mass customization. This revived need for speed provoked press brake manufacturers to reassess the main press drive once again.

The obvious choice was to replace hydraulic fluid with a modernized mechanical system. This led to the birth of the electric press drive. The term electric press brake is now commonly used to describe a direct press drive system, from the torque of the motor to the linear pressing motion of the ram.

This sounds simple, but there is a huge gear reduction needed to transform thousands of RPMs at the motor to tens of inches per minute of pressing motion at the ram. The simplest way to achieve this reduction is to use an inclined plane wrapped helically around a common axis (also known as a screw).

A popular alternative to the screw drive is a system of pulleys with belts threaded in between, like a block-and-tackle pulley for lifting heavy loads (see Figure 2). This drive distributes the loads over various components.

Although these electrical press drives can achieve high speeds, there is a mechanical limit between the highest and lowest possible speed. In operation, though, press brakes use a wide range of ram speeds. Rapid approach speeds need to be as high as 700 inches per minute (IPM), while bending speeds need to be as low as 5 IPM. For conventional hydraulics, going as slow as 5 IPM and as high as 700 IPM isn’t a problem.

Another upcoming drive type is the hybrid hydraulic-electric press brake. As the name suggests, these press brakes use both hydraulic and electric systems. Hydraulic pressure drives the press brake ram, but the direction of AC servomotors determines the direction of the ram movement. Hydraulic fluid isn’t constantly on the move as it is with conventional hydraulics, so some efficiencies are gained.

In hybrid press brakes, fluid flows only when the operator depresses the foot pedal. Ram precision is quite high. The most notable feature of these systems is that the classic directional valves and their associated shifting times are eliminated. In a hydraulic press brake, the valve-shift time is most notable when the ram transitions from a high-speed approach to low-speed bending, and again between low-speed bending to the high-speed return stroke. In a hybrid press drive, when the pump speed or direction changes, the ram’s speed and direction do the same immediately thereafter, no shifting time required. 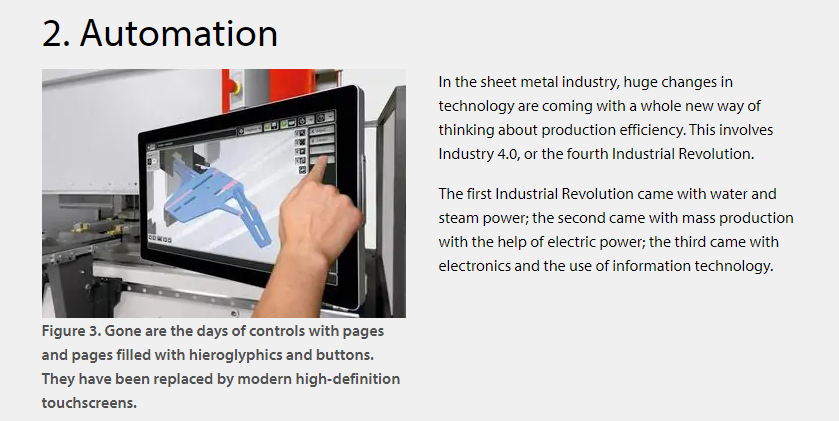 Industry 4.0 is a term for a connected production environment where each part of the whole value chain talks to and with each other, sharing information via a network to improve the entire process. With this game-changer, fabricators can finish more orders in less time than ever before. The aim is for every stage of production, including the planning stage, to have the correct information at the right time. “Trial balloons” or “test shots” are no longer necessary.

Industry 4.0 has had profound effects in the press brake department. No longer do operators spend time programming, test bending, inspecting, and adjusting. Technicians create and simulate the bend program offline. The press brake machines measure and correct for angular error. All this allows for a greater number of small-volume jobs to flow through the press brake in less time (see Figure 3).

Nevertheless, press brake technicians today must deal with a counterintuitive reality: The newer the press brake, the higher the percentage of tool-changing time will be. Here, we’re defining “tool-changing time” as a portion of overall setup time, which historically has also included programming, tryout, measuring, and adjusting.

Modern press brakes have massive part program storage capacities, so all programs can be saved; artificial intelligence databases correct new programs; and automatic stabilization systems compensate for material variations. New brakes are set up with a swipe of your finger across the screen—except for the tooling. In many cases, tooling changeout exceeds 80 percent of the total setup time.

Automatic tool changers can retrieve, remove, rearrange, and rotate tools when a job requires them to be installed backward (see Figure 4). Think of a gooseneck punch that needs to be reversed so that it can clear a preformed extrusion on the blank surface. Such a setup can confuse even veteran operators. 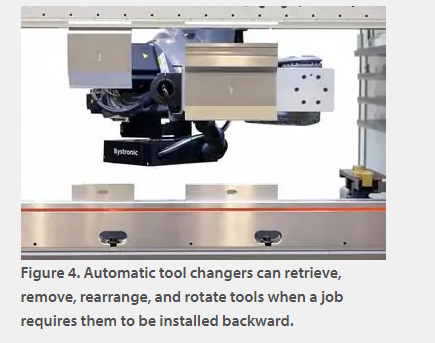 Almost every manufacturing process has many linked activities, one of which acts as a constraint—the weakest link in the chain. Because of all the different part configurations sheet metal fabricators deal with, constraints can be elusive; they tend to bounce around from one process to another.

Fab shops bend parts ranging from the size of a postage stamp with a single bend to parts the size of a car with 10 bends; between these extremes may be tens or hundreds of incremental variations. Shops also deal with varying batch sizes, from one piece to hundreds.

Each product may take a unique path, so the constraint patterns can be hard to identify. Look for accumulations of work-in-process, a telltale sign that occurs just before the constraint. Also look for a concentration of workers; constraints tend to attract additional human resources. Review equipment performance to better understand its overall equipment effectiveness. Most important, ask operators about bottlenecks they experience.

Most fabricators organize their shops in process-based departments. But nearly all parts are cut with a punch or laser, and most parts undergo bending—so why not create a cell at the laser? An operator could pull the blanks from the nest, bend them, and then place them in the transport bin for the final process.

Part flow usually isn’t this simple, unfortunately. Every part isn’t processed in the same way. Putting the press brake too close to the laser would actually block production of large parts. The cost of temporarily moving a press brake for one job would exceed the cost of moving the parts. So keeping the press brake in its own department is again accepted as the cost of doing business—until recently, that is.

The boom in Silicon Valley, though, created significant demand for a different press brake. Floor space was expensive; computer chassis parts were very small. For these applications, the high force and long bed length of the 150- to 320-ton machines had no value. Their cumbersome size actually reduced versatility. Ultimately, this market was willing to bear doubling the cost of the tons per dollar to buy a conveniently sized press brake.

Most recently small, portable press brakes—many either all-electric or hybrid hydraulic-electric machines—have become more popular, not just for the forming speed they offer, but also because of their flexibility. Their low centers of gravity make them portable, and integrated fork truck slots reduce the tip-over risk even further.

A New World of Bending

Fabricators now have new press brake drive systems, including hydraulic, electric, and hybrid hydraulic-electric. They have the benefits of automation, including not just physical automation (think robotic bending and tool changing), but also the sensors and software that process intelligent data. And finally they have part flow flexibility, the ability to move bending machines when and where they’re needed.

One cell has a high-speed fiber laser feeding several press brakes and a hardware insertion machine. Designed for a different product mix, another cell has two punch presses, a laser, one highly efficient press brake with automatic tool changing, and an adjacent small brake to handle brackets.

Now imagine that demand levels change and the first cell needs additional forming capacity. A fork truck driver moves the small press brake from the second cell to the first. The technician downloads the programs, and the brake, which carries its tools in drawers inside the machine base, is set up quickly. Soon the cell has the extra bending capacity it needs to keep the flow going.

Flexible manufacturing is not guaranteed just by having a small press brake in your shop. It’s how you balance the loads and direct the parts to best take advantage of the press brake machines’s inherent sweet spots.

That said, we’ve come a long way from the old mechanical press brake. And it couldn’t happen without modern drive systems, controls, and software—all working together to ensure every press brake machines (and operator) has the information it needs at the right time. Industry 4.0, it seems, has arrived.